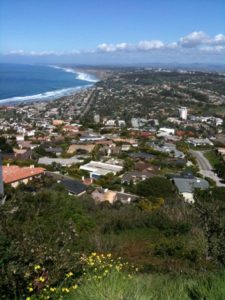 Spindrift Archaeological Consulting is respectfully named after a regionally significant archaeological site known as the Spindrift Site (CA-SDI-39/17,372, SDMM-W-1),   located just south of popular La Jolla Shores beach and the La Jolla Beach and Tennis Club. It is a known prehistoric village occupied by the native peoples of San Diego. This site encompasses a large habitation area known to its Kumeyaay inhabitants as Mut kula xuy/Mut lah hoy ya (place of many caves). First recorded by pioneering archaeologist Malcolm Rogers in the 1920s, the Spindrift Site is composed of multiple cultural phases dating back nearly 9,000 years and is representative of the different cultural phases found in the San Diego region, mainly the La Jolla Complex and Late Prehistoric Kumeyaay.

The Spindrift Site area has undergone extensive development due to intensive grading for homes, streets and utilities since it was first recorded. However, the City of San Diego has worked cooperatively with the Kumeyaay and developers to both reduce potential impacts to remaining subsurface deposits and efficiently allow development projects to be permitted. It is with this collaborative spirit that Spindrift Archaeological Consulting develops cultural resources compliance strategies for its clients to ensure project success and sustainable development.

Additionally, our standard in-house billing rates for all staff levels, with all expenses included, never exceeds $100; instead, our all-inclusive rates are $50 to $100 per hour. This means significant savings and simplified invoicing.